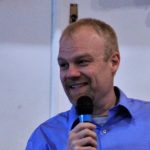 Chris is the Pastor of the First Cumberland Presbyterian Church and is so glad that the church is hosting Fusion Homeschooling. In a former life, (that is, in his twenties), Chris studied music. Chris has a bachelor’s degree in Music, Voice Performance, from the Blair School of Music at Vanderbilt University and a master’s degree in Music, Voice Performance, from the University of Michigan in Ann Arbor. Chris was the chair of the voice department at the Flint School of Performing Arts while earning his degree in Michigan, has served as music and youth director at churches in the Nashville and Detroit areas. Prior to becoming an ordained minister, Chris taught Pre-College Music Theory and Music History at the Blair School of Music at Vanderbilt and conducted the Blair Boys’ Choir.

Chris also has a Master of Divinity Degree from Vanderbilt University’s Divinity School and has been an ordained minister in the Cumberland Presbyterian Church since 2008.